The Meaning of the Altar Coin of the Sacred Well Congregation

Editor's Note: The altar coin dicussed in this essay is availble for purchase in the Sacred Well Congregation Emporium

In many religions, symbolism and allegory are extremely important to accessing and understanding deity. This is especially true in the practice of Wicca, a faith built on personal practice and personal experience of Deity. We use symbols to speak to our subconscious or inner self, our "younger self" and through that conduit we are able to reach our super or collective unconscious — The Divine. We access this Deity to work magic, perform divination and to commune with Deity. The purpose of the Sacred Well portable Altar coin then, is to be a focal point for personal working and contains many of the symbols considered most sacred to practitioners of Traditional Craft Wicca. There is not a single mark on the coin that has no meaning in our religion or exists solely for aesthetic purpose. By studying and understanding the meaning of the symbols on the coin, it can become a powerful tool for magical practice, divination, communion and protection. In time, you will of course attribute your own meaning to the symbols and make them uniquely your own. There are two sides to the coin, the front side is intended to capture more of the seasonal meaning of the year and has more focus on the Divine Masculine, while the back is more tailored to introspection, the tides of the psyche and Communion with the Divine Feminine. What follows below is a description of the artist's intent when fashioning the coin and is a good jumping off point for your personal study.

Getting to Know the Coin: 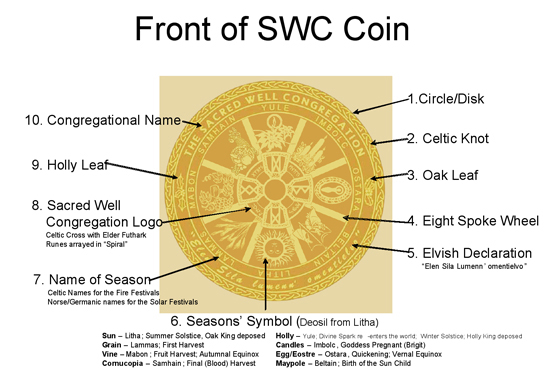 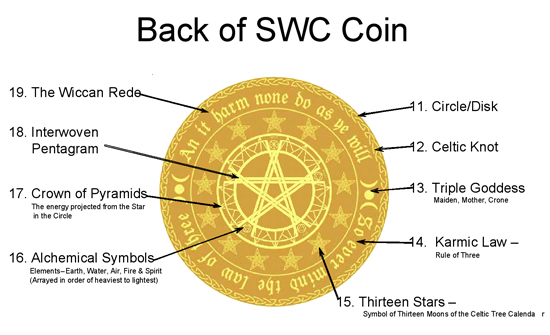 By now I hope you as the reader (and proud owner of our Sacred Altar Coin) know and appreciate the fact that you have not merely purchased an aesthetically pleasing trinket with some neat symbols on it. In fact you are getting an almanac, a rule of ethics, a rule of conduct, a lesson in alchemy, a snapshot of Wiccan cosmology, a meditation guide, a sacred token and so much more. With continued study, the coin will become increasingly personal and its true meaning will be known only to you.

Blessed Be and enjoy your coin!